And now, something I haven't done in a very long time -- guest post.  This is Colby Marshall, an awesomely funny and talented lady, here to say a few words about life after 'the deal.  Read her bio and synopsis, then read what she has to say about the experience.  You'll be glad you did.  I know I am.

Thanks for stopping by, Colby. 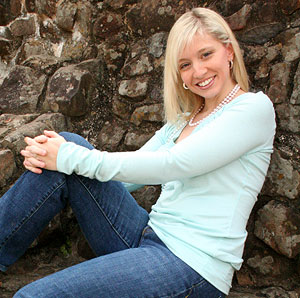 Bio: Writer by day, ballroom dancer and choreographer by night, Colby has a tendency to turn every hobby she has into a job, thus ensuring that she's a perpetual workaholic.  In addition to her 9,502 regular jobs, she is also a contributing columnist for M Food and Culture magazine and is a proud member of International Thriller Writers and Sisters in Crime.  She is actively involved in local theaters as a choreographer and sometimes indulges her prima donna side by taking the stage as an actress.  She lives in Goergia with her family, two mutts, and an array of cats that, if she were a bit older, would qualify her immediately for crazy cat lady status. 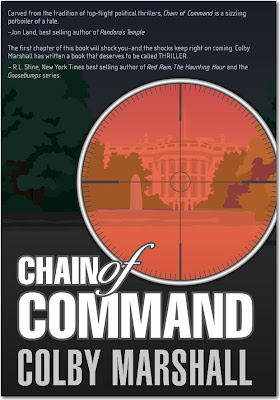 Her debut thriller, Chain of Command, is a about a reporter who discovers the simultaneous assassinations of the President and Vice President may have been a plot to rocket the very first woman -- the Speaker of the House -- into the presidency.  Chain of Command is now available, and the second book in her McKenzie Mclendon series, The Trade, is due for publication by Stairway Press in June 2013.

Chain of Command is now available at Amazon, Barnes and Noble, Sony, iBooks, Kobo, and other major e-readers, or in select independant bookstores.

Watch the official book trailer for Chain of Command here.

You can also learn more about Colby and her books at www.colbymarshall.com

Yes, I know it sounds cynical, but in ways, it’s the truth.  When your book finally hits the stores, you move into that wonderful stage of being a real, honest to goodness author with some excitement and some success surrounding it, a little trepidation dosed in for good measure.  You sign books for folks, you hold your own paper copy in your hand, sure it’s the best smelling thing you’ve ever come across.  You feel over the moon, on top of the world, and a dozen other clichés that mean you couldn’t be happier.

Then comes that awkward stage no author can ever prepare for if only because you don’t ever realize it will happen to you: the phase where your book—the novel that was years in the making, was your dream, your baby, your everything—is suddenly just one more thing you’ve done.  You’re a working author now, and the novel that was your world, the one you built up in your mind to releasing now has to be put on the backburner in favor of *gasp* a career.  Yep, it’s time to do some new writing, to edit new books.  These new pieces of writing must become your everything
.
But suddenly, the shimmer and glimmer of the white wedding publishing dream isn’t on the table anymore, so while writing new books is exciting and fun, it’s now a very different thing for you than before.  It’s not a pipe dream.  It’s just an aspect of your life.  You no longer eat, sleep, and breathe the thought of getting published, which can be a bizarre transition because for SO long you have eaten, slept, and breathed the idea.  You realize, “Christ skipping around the maypole, I don’t get those same tingles thinking about books or have an obsession with my website hits or my Amazon rankings anymore.”  It’s just all in a day, both a beautiful thing and an ugly thing at the same time.
It really is like being a virgin (uh oh. I’m going here).  This thing that is so great is built up in your mind, and then it happens.   It’s a huge deal.  But after that, the mystery and ordeal surrounding it isn’t an ordeal anymore.  Sure, the sex can be great, but it will always be different.  And it’ll never again be your first.  You’ve crossed into the realm of knowing, and it won’t be that SAME excitement.  You will have a different perspective, because it’s your reality now.

So, as I prepare for my second book to release this summer, I savor the memory of what it felt like to hold that first book in my hands, to finally have it in print on my shelf.  I can’t help but know it’ll never be the same, and yet, something about imagining seeing that second book on the shelf is just as exciting in a new way.  After all, having a second book out is something I’ve never done before, too.

Have you ever had something really exciting happen only to discover you were sad you didn’t have it to look forward to anymore?  How did it change your perspective?

Your blog tonight, Colby, had me smiling the whole time because its how I feel about my first ever submission. For me, just the idea of submitting a piece with my name on it was a dream. When I finally hit that "submit" button for JUST THIS ONCE and got the confirmation of submission, I had a momentary panic because I didn't know what to do and I knew that dream of finally making a submission was gone. But like you said, there are still multiple firsts to come. And I'm personally excited about The Trade.