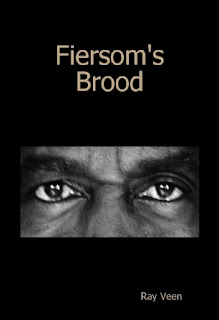 Turns out our billionaire father is like 300 years old.


I’m fourteen, my siblings are all seventeen (because they’re quintuplets), and believe it or not, we all have mental powers. Yes, freaky, side-show mind powers. Apparently our family’s part of some secret, ancient race that descended from Nephilim – fallen angels – like in the book of Genesis.

Yeah. Anyway… hundreds of years ago, my father made a terrible mistake and now some really bad people are looking for him. And not just one group, but a whole bunch. High-tech pagan commandos, soil-borne demons, Nepheel Inquisitors – if they’re freaky and scary, they’re hunting our Father. And unfortunately, because I ‘borrowed’ a shape-shifting coin and took it beyond Father’s sphere of protection, the bad guys found us. They came in helicopters and blew the roof off our mansion on stilts. Then they broke into Father’s secret lab to steal our bassinet (that one’s a little tough to explain). They captured our father. And now… they’re after us.

I don’t know why, we never did anything to them, but they want us bad. We're worried as crap about our father, we'd like to find him and save him, but pretty much all we can do is run. The one thing we’ve got going for us? Mental powers. But guess what -- they’re not that useful unless you need to prank one of your jerk brothers. Oh, and we’ve also got a backpack full of ants.

Sounds weird, I know, but it turns out to be important.


My brothers and sisters talked a little bit, but their voices were soft, like they were afraid that someone in the building might hear them. I felt a cool breeze across my face and snuggled deeper into my camouflage jacket – they didn’t call this the ‘Windy City’ for nothing. I’d say it probably took less than a full minute before I started feeling that pleasant, fuzzy, mental-sagging feeling you get when you’re falling asleep.

And then I snapped awake. I didn’t know how long I’d been out, but my siblings were no longer talking. I figured one or two of them might have nodded off too. Anyway, it only took about a heartbeat to see what had woken me.

It was a face. A little stone face. Like a gargoyle or a gremlin, staring at me from the side of the fountain, four feet away. I tried to think back and remember if I’d seen it there before, but then the thing smiled.

Nope. It was new.

“Uh, Bart? You’re gonna wanna take a look at this…”

I pointed, and he must’ve seen it instantly. “What the… what is that thing?”

“It’s one of those faces I told you about. Like back at Pietro’s. I think it’s watching us.”

I heard Hannah and Miriam gasp, and I knew they were looking at it too.

Simon ran straight over and aimed a kick at the middle of the face. The thing disappeared an instant before his toe connected, and instead, he kicked the side of the stone fountain.

Bart gave him an irritated look. “What the heck, Nerd-rage? Why’d you do that?”

Simon was hopping on one foot, holding the other foot in both hands. He gave Bart an irritated look of his own, like his motivation should have been obvious.

“Because it was watching us, stupid.”

“Yeah? Well I don’t think that was very smart, what if he…”

Suddenly Simon’s good foot twisted and he toppled over. Right where he’d been standing, there was a face in the ground, and this time, it was accompanied by a part of a gnarled hand. It had obviously used its stone fingers to throw Simon off-balance. It looked around at us with an evil grin, then it hooted with laughter. The sound it made was about as ugly a noise as you can imagine, all shrill and phlegmy, and I had to plug my ears before they started bleeding or something. Of course I jumped to my feet. So did my brothers and sisters. We all kind of kind of began shuffling away from the thing, slow and steady and careful.

Simon joined us a moment later and looked down on the little gremlin face.

I’d been taking unconscious backwards steps, and I stopped when my lower back came up against a cement planter box. I was just about to say how there’d been dozens of them in Pietro’s parking lot when something pinched me hard in the butt. I yelped and spun away. There, on the wall of the planter where I’d been standing, were three more little faces. And one hand. It’s fingers made a mocking ‘pinch-pinch’ motion, and the faces all laughed.

Then I heard Hannah gasp. With my peripheral vision, I saw her hop to one side. There were more faces beneath her. Miriam hopped next, and then everybody else. The things were popping up all over. Bart didn’t have to call out a contingency plan, or order us to retreat, or really say anything at all. All together, we started moving, running towards the van.

We got barely fifteen feet before a pool of the little faces bubbled up out of the concrete. We all changed direction in mid-run, like you see herds of gazelles doing in safari videos. The faces lurched to the side, disappeared, then began popping back up in our path. In the lead, Bart switched directions again, but the faces all oozed towards him. We were right on top of them. We didn't want to, but there was nothing else we could do -- we started running across them. But we stepped lightly, gingerly, more like hopping from clear spot to clear spot. The faces were all around us and there was just no way to avoid to stepping on them, which seemed to be what they wanted. Whenever one of my feet came down, it was unexpectedly uneven, like running across a beach of fist-sized stones, only the stones kept sliding around beneath you. I stubbed my toes, wrenched my ankles; I'd already lost my momentum and I was starting to lose my balance. My arms pinwheeled as I ran, my body twisted, and all around me, my brothers and sisters were doing the same.

The faces stayed right with us, and I knew it was only a matter of time before one of us tripped up and fell into them – I didn’t even want to think about what would happen then. Bart changed directions one more time, still trying to lead us out of the pool of cackling faces, but they stayed right with us, right around us. The sound they made was like a chorus of circular saws chewing into wood, and it was so loud and ear-splitting that I was sure it would wake up the entire city.

We tried changing directions one last time, but it was no use. The van was a dark smear in the distance, and nothing we did seemed to bring us any closer. We were heading towards the road when Isaac tripped up. I saw him stumble, his feet catching on more bumpy faces, then he lost his balance and sprawled sideways among the gremlin-ey mounds. Hannah and I were the closest, we instantly changed directions and converged on our brother. We grabbed arms and parts of his jacket and tried hauling him to his feet, all the while the sidewalk roiled beneath us. But he seemed to be snagged – in multiple places.

Isaac yelled, “Ow, ow, ahh!” and tried to scramble up, but too many parts of his clothing were pinned to the sidewalk. The creatures kept snarling and hissing and laughing and pinching, and we couldn’t get him free. Suddenly I got one of those monstrous bursts of energy, the kind that’ll let you topple a car or rip through a wall if you’re mad enough. With a growl of my own, I hauled on Isaac’s arms with all of my strength. I heard tearing cloth, and then he popped to his feet.

Of course there was this one teensy problem. I hadn’t noticed that one of the little buggers had the heel of my combat boot in a death-grip. When I tried to help Isaac up, I was forced to step back, only I couldn’t. You see my dilemma?

So I fell straight to my back.

Instantly little stone fingers were pinching me and poking me, and scrabbling along my body to get handfuls of clothing. It hurt (and tickled), and freaked me right the heck out. I panicked. I howled. I called for help.

And then they were all there.

All my brothers and sisters, all around me, tugging on me. But the fingers had hold of too many places. I don’t why, but they had way more of a grip on me then they’d had on Isaac. Maybe cuz he fell to his hip and one side, and I was spread-eagle on my back. My siblings were shouting and the faces were shrilling, and my limbs were being pinched from below and wrenched from above. Bart’s voice rose over the whole kooky mob, “Let. Go. Of my. Baby. Brother!”

Then he got really mad. He started stomping and hollering, and jerking waaaaay too hard on my right arm. Miriam was yelling something – I thought she was yelling at Bart to be careful – but she was yelling at me. I couldn’t make it out; things were just too wild, you know? Then she reached down and unzipped my field jacket, only she did it all passive-aggressive like I was some helpless toddler who couldn’t have done it myself. In the midst of all my peril, I found myself a little irritated at her, but then I finally understood what she was trying to tell me.

“Slide out of your jacket!”

And yeah, it was a good idea. Only I couldn’t.

Isaac, on my left, had the sense to let go. Bart, on the other hand (literally), was still in a freaking rage. He was doing something weird, too. He had my arm kind of across his lap, and he was half-kneeling, half bent-over, roaring down into the impish faces. It looked like his mind had snapped, and of course, there’s only one thing you can do with a person who’s hysterical. I pulled my left arm out of my sleeve, then reached up and slapped him.

He was stunned. And he let go of my arm. I slipped that one free, then I was on my feet, then I was running. We all were.