'Song of the Selkie' 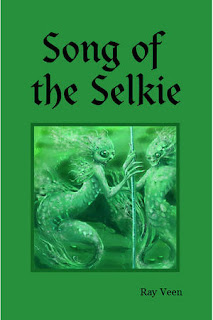 They are the Selkie. Legends say that if a lonely human steals one of their skins while they’re distracted with their music and strange games, they can force the faerie to become a handsome and loyal spouse. The selkie, though, will never be truly happy again unless they can find their seal-skin and return to the sea.

Mathan is the half-breed child of one such couple. Fourteen years after being tossed into the ocean and raised by Merrow kelp-farmers, Mathan is reunited with his widowed mother. He longs to take her back with him, into the sea, where they can live together in the harmony and ethereal beauty beneath the waves, but in order to do so, he'll first have to steal her seal-skin from pirates. And not just any pirates, but the bloodthirsty pirates of the Brackenmaid: the legendary 'scourge of the western waters'.


A group of perhaps fifty seals had waddled up onto the beach surrounding the rock formation. Mathan watched them from the hip-deep water, trying to keep his balance against the push and pull of the breaking waves. For reasons he didn't understand, the animals were rolling up onto their backs, and even stranger, many of them began rocking from side-to-side. It was now dusk, and it was becoming hard to see, but there was no mistaking what happened next.

Several of the seal’s bellies split open from their tail to their necks.

Mathan was instantly horrified. There were no cries of pain and no blood, but the creatures seemed to be empty inside, almost hollow. Then Mathan saw the hands. Pale hands shot out from the gashes in the seals' bellies, grasping the skin edges from somewhere inside, and forcing them apart. Even more shocking, the hands tugged and pulled, until they were able to thrust heads and shoulders through. They were human heads, and human shoulders -- and they were crawling out from inside the seal bodies. As disturbing as it was, Mathan could not look away. The new beings wriggled and twisted and pulled their way out, then rose to their feet, letting the ocean breeze ripple through their hair and flowing garments. They were as beautiful as the skins were ugly, and they left them in piles, rumpled and deflated in the sand.

They seemed relieved and excited, overjoyed at finding their way out of the wrinkled skins, and they immediately began running and skipping across the sand in happy groups. Several of them began leaping into the air, clapping their hands over their heads. Where there hands met, flashes of light appeared, and grew into colorful, floating orbs. Mathan caught his breath and realized what he was seeing: faerie-fire.

These people were fae.

All Mathan's fears were put to rest. He understood it now: these creatures were the seals, at least on the outside. At night, apparently, they were something else. More of the faerie-fires were clapped into life, and in the cheerful light, Mathan could see how beautiful the people were. They had wild, colorful hair that flew in the breeze, framing their delicate, fair-skinned faces. They wore expressions of joy, leaping to and fro, lighting new faerie globes and smiling at one another. Then the music began.

Mathan was stunned beyond words. In many of their hands, ghostly, glowing instruments took shape, and they all began to play together, a tune so beautiful, and lively, and enchanting, that the young man’s heart was caught up in it at once. He’d never heard the particular melody before, but there was no doubt about it – this was the music that had always lived in his soul. Forgetting the sea-cow, he was drawn towards them, splashing through the waves without a further thought. The song pulled him forcibly out of the water and onto the beach, right into the midst of the group.

The fae seemed happy to see him, and took him by the hand as they began to dance. Mathan joined in as though he’d been waiting for this moment all his life. Without really deciding to, he found himself moving to the music, feeling like a part of it himself. His heart and voice sang along with them, although he didn’t know the words, but it didn’t matter. The only thing that mattered was the joy of being set free. It had been within him all along, reflected only by the music he heard when his mind was quiet, and it now burst forth across the sand beneath his dancing feet. Beautiful singing faces danced around, flashing past him, drawing close, embracing him, then spinning him free. Mathan no longer thought at all. He simply felt, and his voice and body expressed it.

Time was meaningless as he frolicked with the faerie people. They danced and sang, played strange games running along the beach, then danced and sang some more. The music never ended, they followed their own hearts, and they let the joy flow freely out of them. In one game they chased and tagged one another, laughing all the while. In another they hid in shadows then jumped out, catching each other in playful embraces. Everything they did involved movement and music and laughter, but Mathan never once thought about being tired. In fact, he never thought at all. He simply felt and did.

His hand touched other hands, his face grinned at other smiling faces, and his arms wrapped around other dancing bodies. Then it was all over.

The first indication that something was wrong was when the fairy lights winked out. Mathan was still caught up in the music and revelry, but he when it all came to a sudden stop, he stood there, breathless and confused. Then the creatures all began running down the beach towards their skins. Alarmed, Mathan ran with them, noticing that the sky in the east had turned gray. None of the fae spoke or smiled. They simply shot worried glances over their shoulders as they found their skins and began to crawl into them. Mathan stood in the middle of the group of sealskins, watching in confusion as their bellies closed over the lovely beings. One-by-one, their frightened eyes disappeared beneath the fat and wrinkled swaths of skin. Seals began turning over and flopping back into the waves while others searched for their skins.

A strange fear grabbed hold of the young man and he stumbled knee-deep into the waves. Chub was there before him, urging speed, but something made him look back at the end of the beach. He could see very little in the gloom of dawn, but over the roar of the surf, he could hear a strange sound – a strange voice – a human voice.

All around him, seals were splashing through the waves, desperate to escape into the sea. The panic infected him, and Mathan splashed to the sea-cow and scrambled up onto her back. As Chub waddled backwards into deeper water, Mathan nervously watched the strip of sand, praying he could get beneath the waves before he was seen. Although the light was slowly growing, nothing appeared to account for the voice at first. Then, just as Chub was deep enough to turn around, a female figure walked out from behind the rocks at the end of the beach. She was dressed in rags and carrying a basket, and she appeared to be singing.

She stopped when she saw Mathan.

The sea cow dove, plunging the young man beneath the surface of the water. A cascade of bubbles surrounded them, as the air they’d trapped struggled to return to the sky. It caused his long green hair to whip into his face, as tangled and confused as his mind. He shook his head to clear it, and soon saw the familiar underwater landscape speeding past them.

The enchanted whirlwind of the night was now over, and together with Chub, he was sinking back into the only world he understood.