The SCBWI conference experience, part one: 'Who I met'

Honestly, at this point, I could sit here typing for hours trying to capture every aspect of the whole conference experience -- maybe write the longest post in the history of my blog.  But don't get bored and click away, friendly friends, because I would never do that to you.  I like you.  Actually I'm kind of in a sweet spot right now, still buzzing from all the wisdom and information and the thrill of the whole thing, yet I'm not quite done mulling everything over.  The way it plays out is that everything is still fresh in my memory, but I haven't yet over-analyzed it, so I can blog about the high-lights without boring you with pontifications over the deeper meanings and far-reaching consequences of my various encounters throughout the weekend.
And to abbreviate it even further, I've decided to break it up into two blog posts: 'Who I met', and 'What I Learned'.  Come back Monday-ish, because I've got a feeling that second one will have more value to those of you who were unfortunate enough to have missed it.
So here it is: 'Who I met at SCBWI 40th Anniversary Summer Conference' 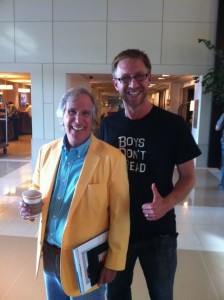 So.  The people I met through Bryan.  It's kind of a nice segue into one of the more enlightening things I realized while at the conference.  Turns out, there were really two kinds of people there.  Not to generalize, because I'm sure there were plenty of overlaps and whatnot, but the people I met sort of fell into two categories, the 'veterans' and the 'up-and-comers'.  The veterans were people that have had a few books published, maybe many, or maybe just one soon to be released.  These guys seemed to be there more to network, socialize, visit their friends, meet their agent or editor for lunch or dinner.  They didn't do much of conference-ey type stuff, and in fact, some of them hadn't even registered for the conference.  I visited with a number of them -- wouldn't say I "made friends" -- but just being around them and over-hearing their offhand discussions about their books, and their agents, and the biz in general -- it was utterly invaluable.
The "up-and-comers"; these were my people.  People like me.  Folks that were there to learn, break in, meet an agent in line at Starbucks and successfully pitch their book to them.  These guys (mostly they were ladies) went to all the sessions and keynotes and whatnot, and took notes, and traded business cards.  Turns out I was more comfortable with them, maybe because we had more in common, but when I was them, I felt like this spirit of comraderie, belonging, fraternity.  Basically, let's just say I made some good friends with many people I'd love to see again at future conferences.
Moving on (hopefully towards some kind of end), here are some shout-outs to the folks I met at SCBWI:
I need to end this post.  I really do.  So yeah... welcome to the end of the post.

More on SCBWI in a few days.

Okay, first of all. That Kelly was NOT me in case you were wondering, V. (I kid) But hopefully one day I will be an author of a bunch of books, too and get to hang with you and other cool cats at a conference. :)
This was a fun read (and pics). So awesome that you got to meet so many likeminded people. I HAVE to go to this conference one day!

I still don't remember her being doubled over with laughter, but it's been known to happen.

Thanks, dude... it's mutual admiration.

You've got plenty of personality yourself, buddy. And as much as I've always wanted to be a star of the apocalypse, there's no way in hell I'm going to saddle up before you and I hit the Beer Exchange. First things first.

What a completely cool experience! And I think it is so awesome that you met so many other Michigan writers! I know there are lots of us, but it's just nice to actually SEE one in person. :) Can't wait to read pt 2!

Kelly -- You should go to that conference. With your sparkly personality, you'd fit right in. Plus, I'd bet you'd know a lot of people there.

Bryan -- You must have blinked or something, because I know what I saw.

Jeff -- My buddy is already trying to get me to go but I told him I promised I'd wait until the great JC Geiger visited Michigan. Even if that's two years from now.

Vivi -- Apparently there's a great regional SCBWI on Macinaw Island next month. It'd be awesome if we could all go, but it looks like I'll still be financially recuperating from LA.

Thanks for the shout out, Ray. I'm so glad I could be of assistance in psyching you up for the long trip home. Glad you made it all right. Also glad my recap of the Henry Winkler session was valuable. Hope we get a chance to meet up again at future conferences. You rock, Ray Veen!

Great recap. I am glad you had a good time.

Man I hope the world doesn't end because I am definitely planning on going to the LA one next summer.

I'll be at the Winter Conference for sure...my fourth time : )

You rock, Sarah Perry. How was your journey home, btw?

Jonathon -- Aye. Michigan writers. You know, the ladies were telling me that the regional (MI) conferences are extremely rewarding to. We should go.

KM -- I really hope you're serious about that, because we're already making plans to go back next year, and I would LOVE to meet you.

This sounds like so much fun. I'm totally jealous you met Tracy in person. We've been blogging together for years...he's a good dude and a talented writer.

You did well, Ray! OK, now that I've got that over with I can go back to being a hip and friendly lady from Australia who makes people dance - awesome !!!!!! :D Lovely to meet you - and by the way I love the way you write. If I knew what a 'voice' was I would say you have a really awesome one.

I'm not gonna lie: I am petrified of going to a conference, but I promised myself that I would go to my first one in 2012. Hit me up if you have a good lead on one.

Anita -- You should meet Tracy in person. Nice dude.

Caz -- Cool, you read my stuff? I wondered if anybody was ever going to take the time.

Jonathon -- There's a regional (MI) conference in Mackinac next month, but it sounds kind of pricey. I'll let you know if I hear of any more or if I decide to go to one.

Wait - was I that Kelly? The alarming Kelly? I don't remember being alarming. But if I was I don't apologize - alarming is as good an emotion as any, after all.

In any case, I'm amazed at all the people who were able to collect their post-SCBWI thoughts. Mine were all scattered into the ether, and are only just drifting back to earth now.

And it was really nice to meet you. Cheers!

No way, Kelly, you were not that Kelly. You were awesome and pleasant and fun, and it was very nice meeting you.

I saw the Mack one a while ago, but already knew I wouldn't be able to go that weekend, so I never looked at the price. I am not a member of SCBWI and the Michigan chapter's website is so atrocious that I never head there.

Oh, thank god. I was worried there for a minute! I try to avoid alarming people when possible. :-)

Ray, good to see you blogging again, old friend. I left you an award on my blog!

Absolutely fantastic blog!!! Glad I found it! Love it!!!