What September has wrought:

Got some bad news from my agent last Friday -- 'Talonshale' will not be going into submissions. Which is discouraging. But the fact remains that I really like writing, so that's what I'm gonna keep on doing, and here's where I'm going (the working title is 'Sulwig'):

Nathaniel is a hundred-million dollar research project, but he has no clue. He believes he is just an average sixteen-year-old, with below-average grades, until he finds himself trapped between warring high-tech weapons researchers. When he acquires a cell-phone that can make objects vanish and re-appear with a simple text, Nathaniel finally begins to question who he is, and what he's capable of.

As of today, it's fully plotted and outlined, and I have the first few pages down to capture the voice and style and whatnot. And I'm pretty excited about it. So let us not dwell on the negative. Instead, let me share a bit of last weekend's 'therapy' -- the 2010 Michigan Irish Music Festival. Me and a kilt, and my girly-girls and some mind-blowing Irish music (and some beers). 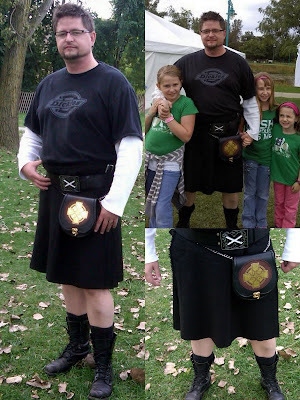 In honor of the Irish Music festival, Cindy and I recorded this video of us playing our fairly new instruments that we've just begun to learn this summer (in other words, go easy on us). I have other versions of these tunes in which we make fewer mistakes, but I find it extremely cute when Cindy messes up and turns those sheepish eyes to mine -- makes my heart all sunny and warm.

Love the kilt! I went to the local Irish/Scottish Festival here a couple of weeks ago and had a blast.

And, good for you for staying positive and pushing forward. You are a true inspiration.

That ROTS about Talonshare...but you WIP sounds incredible. You are quite tenacious my friend - and quite talented.

That therapy is awesome and the video is completely winning--of both of you. And I love your attitude. I really like writing too, let's keep doing it no matter what. I'm truly sorry about the news.

What is important is that you have written an amazing story that is going to be on tap when you do dwell in that place of published author. So there.

KM -- Thanks for the feedback on the elevator pitch. I haven't really tried it out on anybody yet and I wasn't sure how interesting it would be without mentioning the big surprises.

Tina -- Glad you liked the video. And it's nice to know that I'm not the only weirdo who wants to continue writing no matter how much rejection I endure.

Anon -- Are you my mom? You sure sound like my mom.

Good luck with the new book.

I'm so right there with you, Ray. Focusing on the positive is the only way to go. One thing I've realized over the last few months is that I just need to do what I love to do, write what makes me happy, scoot it out into world and make a little wish that someone else might love it too. If it's meant to be, it'll happen.

The new book sounds very, very cool! So does drinking beer!! I only have about a week to go and I can finally indulge again!

Vivi -- I hope you're right about the 'if it's meant to be' thing. And if not, I'm starting to get used to the idea that me and my family and friends may be the only people who'll ever read my work.

Mercedes -- Aw, you're heart drops? Really? That actually means a lot to me. Thanks for that.

I just sent my latest manuscript to my agent a couple days ago and I keep thinking about your TALONSHARE experience and how difficult that must be for you (and your family, too, who must be so into this writing ride you're taking). Anyway, you are inspiration in many ways, and while I know that that won't get your book published, I hope it helps you feel an itty bitty better. And I looooved the music!

I like the part about Cindy's sheepish eyes....I think the same thing when she turns them to me....and having ANYTHING right now to make me feel sunny and warm is FANTASTIC! :) Love to Cindy, kudos to your writing (way to keep it up!) and doodley-doo to your moooosak.

Urgh. Well, you certainly have one of those "my path to publication was a rocky one" that keeps us (in the league of ordinary writers) going. I'm so glad you're up to sharing it. Thanks. And I'm so happy that you are plunging on and that you still love to write. Sometimes that gets lost in all of this. :)