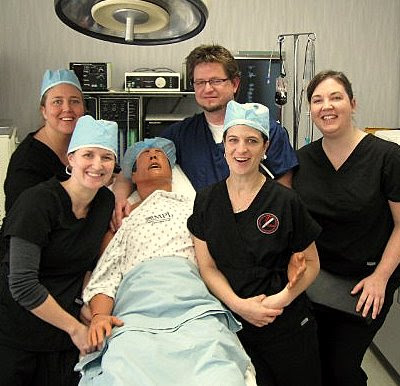 What you see here is one of my big excuses for only being on page 91 of my latest manuscript -- I have a second job.

In January I started teaching a surgical technology lab at Baker College, and these here are my splenderific students. Shout out to Christine, Lisa, Shawn and Rhonda. And no that's not my hand wrapped around Shawn's waist. It's Pat's. Pat the surgical mannequin. (Shout out to Pat). 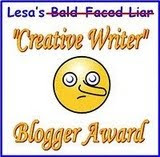 And now the real reason updating so quickly (because for me, seventeen days is practically back-to-back): I was given a tag/award thing. By the charismatic writer/poet/music nut, Kelley Pollark. In her own words, I was given this award "because I'd like him to post more."

So thank you very much, Ms. Kelly, and here is the post you wanted:

1. Thank the person who gave you the award and link them.
2. Add the award to your blog.
3. Tell six outrageous lies about yourself and one truth.
4. Nominate six creative liars ... I mean, writers and link them.
5. Let your nominees know they've been nominated.
Note: I'm breaking the rules a little bit, though. To make it more challenging for the people who really know me, every single one of these things is more or less true. Only of them is completely true. It's okay if I do that, right Kelly? Cuz if I don't mix it with the truth, my wife and my mom will see right through the lies and ruin the fun for everybody else like they've ruined my street cred.

1.) I was injured in the Gulf War by my own gun, the M249 "SAW". Yeah... I tried to disassemble it with the charging handle cocked (which coils up a massive spring), and when I removed the stock, the steel firing pin blasted out at me, slammed into my mouth, broke two of my teeth, and ricocheted off into the desert. My company commander misunderstood my explanation of the events leading to the injury and talked about nominating me for a Purple Heart.

2.) I've been literally knocked unconscious twice. Once by wrassling with my older cousin, and once by walking into the roof of a porch that had been built by two short guys. . . my father-in-law and his brother.

3.) After the third consecutive morning of waking up in the woods with spider bites on my lips, I was told by an Army medic that there must be some chemical in my saliva that tastes especially good to arachnids.

4.) This one time in surgery, I got a bloody scalpel imbedded about three inches in my forearm. The nurse made a sick-looking face, wriggled it out, and we all kept working until the procedure was finished. I bled inside my sleeve for twenty-five minutes.

5.) Most people won't understand this, but it's actually fairly difficult to lift the body of a deceased patient onto the tray in the bottom drawer of the morgue cooler. They always end up cock-eyed and crooked, and it's a real problem. . . good thing I know a trick. You get down like a runner in starting blocks, and then you slam that sucker shut. Hard! The body kind of rolls up on its side, then flop back down perfectly centered in the stainless steel tray. Works every time.

6.) My most recent job-related injury occurred while I was retracting a rather large vagina so a surgeon could suture in a bladder sling. He got a little sloppy while he was sewing, and sunk that freaking suture needle deep into the web of my thumb. I was like, "Ouch!... Dude, how could you miss that vagina? -- It's huge!"

7.) My ultimate dream is to learn to play the bouhrain, bouzouki, and penny whistle, and live in a castle tower with Guinness on tap and robot servants made up to look like chessmen who can pour the Guinness and bring it to me. (I would say, 'pour black-and-tans', but that's just a little too unrealistic.)

Awww. Thanks Ray. I needed this. Outrageous lies are us, but I think I'm going to have to work hard to best your half-truths.

Whoa! Those are some stories!
My guess is that you have knocked yourself unconscious twice is the full truth. Holy spider bites and scalpel injuries!
Pat's a lucky guy to have a teacher like you to have his back ;) You should bring him to office parties!

You know what this means don't you? You can't wait another two weeks to post which one of these is the full truth, and really, you need to point out the twists that make the others false! ;)

Have a great weekend! :D

Guinness...mmmm...Guiness. My sisters and I went to see Flogging Molly last night. See, that band goes perfectly with Guinness on every level.

I'm off to award and link and lie.

Nice, Ray! I totally appreciate that Kelly got you back out here and I also agree with her about number two being the truth.

i am going to say #7 although, i don't think it is completely true because he forgot to mention living in the castle with his queen.

I want my very own surgical Pat. I will love him and hug him and name him...Pat.

Fascinating stuff, you liar. I can't wait to make wild things up. Thanks for the award!

Mary -- Have fun with it, buddy, and thanks for understanding.

Kelly -- Did I mention that Pat has interchangeable sex organs? Maybe I should bring 'it' to parties.

Nisa -- Answers forthcoming, my friend. Thanks for checking in even though I've been a terrible blogger lately.

KM -- I can't wait to hear what you come up with. Even though it was probably two days ago by now.

Cindy -- Absolutely right. The queen is one of the most important part. Along with the king-size bed on the top level with an incredible view of Lake Michigan. Would you like that, my darling?

Mercedes -- I'm thinking your lies are going to be even more disturbing than mine. Can't wait to check them out.

Paul -- Unfortunately, I only have the one huge vagina story. Want to hear about the IV drug user with the three broken off needles in her neck?

Now I know I should have worried about you much more than I did, and hey, I worried plenty! In all fairness I think you should have included a large penis story. As for the "lies," well, I am reading most of them for the first time, so I am just about clueless, except for a couple, but don't want to ruin the fun (not yet, anyway!)

By the way, I spit my water everywhere when I read #6. OMG, please tell me it's true!

Checka-check it out V...my 7 "stories" are up and you have been appropriately thanked.

Vee -- Hmmm... sounds like you wouldn't have been as 'fun-ruin-ey' as I thought.

Vivi -- Looking forward to reading yours. And yes, some or all of number six is true.

pet insurance
Dog breeds including the Australian Cattle Dogs and the Portuguese Podengo Medio are typically the types that enjoy digging earth.