So I've been sitting here ruminating all philosophical-like on the concept of profile pictures. Bear with me, cuz I don't have any real point to make, other than to say that profile pictures are a strange convention.

I was reading an article on CNN yesterday that described the phenomena of folks creating idealized personas online, and how some people are now paying artists hundreds of dollars to create portraits and avatars. And as disturbing as that is, I completely understand why these pople are going to all the trouble. Cuz I'm right down there with them.
On the internet, you have a lot more control over people's perceptions of you than you do in real life. You can project whatever image you want; you can even pretend the be the person you wish you were. I suppose its a little like dressing up in your Sunday clothes to go to church (or "your Friday clothes to go the bar" might be a better analogy). It's human nature, right? We all want to look our best so that others will approve of us, or at least have a favorable opinion of us when they 'behold our countenance' as they say in the Good Book.

Even so, the concept as a whole suddenly feels repugnant to me. It's all so vapid and pretentious, and I'm suddenly gripped by the urge to find the most unflattering picture of myself and use it for my profile pic on every social network I'm a part of (side note: I'm involved in like six at the moment -- supposedly that's a little on the low side).

Anyway, getting back to my nonexistant point -- in all honesty, my profile pic looks nothing me the real Ray of Friday, August 28th, at 9 AM. I wish the real Ray was that ruggedly handsome all the time, but the camera just happened to catch me at the right moment, from the right angle, on a 'good-hair-day'. I've gained fifteen pounds since them (mostly from quitting smoking), I've got a zit on forehead, and my hair is sticking up because I need a shower. Not only that, but my office is dark right now so the whole ghastly image is lit by the sickly blue glow from my computer moniter.

I should really make this my profile picture. 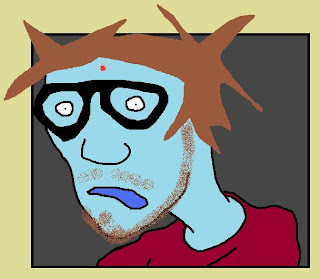 First of all, good for you for quitting smoking. My honey and I did that together many moons ago, and it's one of the smartest things we ever did. Secondly, pictures can be a strange thing. I love having mine taken, but I know that's not the case for everyone. The profile pic you posted here isn't bad. Maybe just a bit too blue.;-)

Okay, this is funny because at my reunion last weekend, a few people were complementing me on my pics I put up on Facebook. I said "Thank you, but I really am a frumpy mom most days." It's funny because I do only put up the good ones. I don't take pictures of myself in my pj's, disheveled hair and no makeup. Which is basically what I look like all week! So no, it's not the everyday me on my profile/FB. But I have a rep to protect. ;)

Deb -- So do you or husband still have dreams about smoking?

Kelley -- I commend you for your co-honesty.

Tracey -- My cartoon guy kind of likes you too.

I will probably keep using my profile picture until I am 76. It's hard to come up with one that doesn't make you feel like a phony, a model wannabe, or a wax sculpture.

Too many typos in my original response. Here it is in readable form...

However, I hear you on the vanity of having professional photos taken or airbrushed or whatever, that's way overboard and a complete waste of money. The money spent on the fancy photo could feed an African village for a year.

But, I say, for the love of being human, don't put pressure on yourself for putting a decent photo up for your profile pic. It's alright to do so.

And, your profile picture is you, no matter what or when or how much weight you gained, it's still you. So it's okay.
:)

I only use pictures from about four years and twenty pounds ago.

Oh, heck, if I was going for the best photos ever taken of me, I'd be pulling out my 1980-something album!! I just like to play around with photos - I usually take them of myself (and then photoshop them) I just changed mine today as a matter of fact. Because we all know that I can't sit still that long, even in a picture...

I loved this post. I've been pondering the same thing. I lost a bet once,and the consequence was that I had to post a picture of myself with absolutely no makeup. No hair, nothing. And it was terrifying in a way, but very freeing at the same time. In fact...I know what today's post is going to be. Mind if I link them to your post?

So true about being able to control what the public thinks of you through the computer... My friends and I were actually talking about this the other weekend.

KM -- You make some good points. Thanks for turning this post towards an actual discussion.

Wenston -- Yeah, your pictures all move around like in Harry Potter.

Mercedes -- You have my full legal consent to link here. As long as you also link to the picture with no makeup.

Angela -- I wondered about the flag. Very intimidating, I must say.

Keri -- Thanks, and congratulations to you on... jeez... everything.

Never think about smoking at all. In fact, the smell of cigarettes makes me queasy. (Ex-smokers can be vicious.) ;-)

Hey, Ray! Here's that link you asked for over at Wendword!

Yeah... I kind of have the opposite problem. I am so drop-dead gorgeous that I always develop stalkers if I put my real pictures up. So I find weird looking people on the street ant take their pictures.

I'm posting a new photo on my blog soon, but mostly because my hair is so different. I thought about photoshopping off several pounds, but I do run into people in person a lot, so I'd be found out, anyway. Better to just exercise, I guess.

Anita- they say the camera adds ten pounds, so I feel completely justified in taking them right back off! Heaven knows I don't need any extra!

But we're the saddest bunch of revolutionaries EVER.

I am happy you quit smoking, but I do have to tell you I still dream about it about once or twice a year even though it has been over 20 years. Same for my Mom, or so she used to say.So it must be normal. As for profile pics...mine is tinged with green and I never wear glasses unless I am reading, but it's the best picture of me I have. Still, people have ragged me about it. I look at the bright side...in all these years I have never had to deal with perverts or stalkers, so yah.