Your world is about to change

I feel a new story idea coming on. Whenever I fixate on something and start compulsively researching it, it turns into a story. One time it was Irish faeries, another time it was paranormal abilities, once it was angels, recently it was lucid dreaming, and now -- robots. I can't get them out of my head. They're all blinking and whirring and marching their way relentlessly through my brain, and God help me, I don't want them to stop.

Anyhow, I know it's beyond nerdy, so I won't bore you too much, but here are some of my faves. From clockwise upper left to right: Actroid (an amazingly lifelike interactive android), Mr. Asiho the bartending robot, cheeky Nao, Sony's Qrio (Youtube 'Qrio', those suckers can dance), Toyota's violin player (they've got an awesome robot band), Robosapien V2, Rovio (a fairly cheap wi-fi spy robot), and Honda's loveable little Asimo. 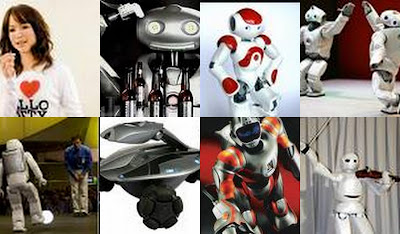 Assuming you took the time to read the whole list, you're probably thorougly convinced of my dorkableness now. If not, you soon will be. This thing here is actually a robotic exoskeleton that senses nueral pulses and enhances skeletal muscle movement. It's called HAL (human-assisted limb), and it's nearly ready to be marketed for the elderly and the disabled. So yeah, no more flipping the bird as you pass silver-haired drivers -- they're likely to chase your car down on foot, rip your door off, and pound your face to goo. 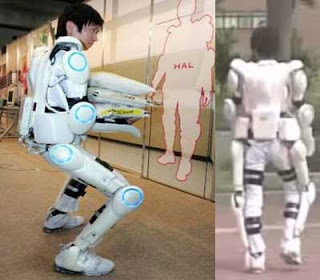 On a less violent subject, have y'all seen 'I-Robot' with Will Smith? It's loosely based on an old Asimov tale, but it paints a very likely picture of the not-so-distant future. In the next twenty years, robots are going to transform our society just like the automobile, and the television, and the computer, and when I say society, I mean our homes: our day-to-day lives. I mean your house. Don't believe me? Thirty-five years ago it was predicted that by the year 2000, computers would be in practically every device we use, and people laughed. Well who's laughing now, sucka? Bill Gates, that's who. (props to Bryan for borrowing his word)

Anyhow, I think that's where my story's gonna happen -- right on the cusp of the transformation.

The main character will have gotten rich by investing in robot technology and live in a replica of Obrien's tower where robotic chessman serve his every whim. But he'll have chronic hiccups.

I'd read it. Robots are cool. So is Ireland. Perfect combo.

Until robot become sentient, I feel no reason to acknowledge their existence.

...and then the robots become self aware and drink all his Guinness. Then the robots get hiccups and self-destruct. Guinness saves the world. Amen.

Artificial Intelligence...Bicentennial Man...2 of my favorite robot flicks that I don't mind watching again and again. It's a fascinating subject with many new depths to plumb. I say go for it...of all the stories you have written of course, Omnipotanium is my favorite, it could have been written by Bradbury or Arthur Clark...you have a real knack for sci-fi. Oh, there goes some more street cred. Sorry.

Okay, he wasn't exactly a robot but I really enjoyed Iron Man the movie so most likely I will eat up a robotic sort of story.

I like gadgetry and metal suits and high-tech stuff. When I was a kid I watched Japanese robot TV shows all the time.

Good luck with your new story! :)

You are such a male. XY.
The force runs deep in you.

I wanna be a robot.

K.M. - Despite the name, I suspect Mr. Asiho the bartender is Irish.

Tracey - I understand he has a good sense of humor and a sypathetic ear - as any good bartender should.

Carrie - Not so cool. My robots, er, my main character's robots are just super neato servants.

Blackbird - I'm typing in italics so that you'll know I'm whispering... the robots put a hit out on you... you didn't hear that from me.

Vivi - God bless Guinness. (You are a crazy woman, you know that?)

Vee - Stop it, Mom, geez... all my friends are looking and everything.

Pink - Astro-boy!!! Can I get a whoot!-whoot! And what was the one with the kid with the helmet and antennas that could turn into a giant robot?

Madison - Thanks, but no matter how good the story is, it'll have to wait. Other works, knowuttimean?

Elizabeth - I can't fix cars or shoot animals or play sports, but yeah, I'm kind of a guy.

Shorty - I can arrange to have your consciousness transferred to an android body (like Actroid), however, you should know that it's a rather expensive process.

Wait... You mean you could put my brain in a robot body? Can I chew nails and spit them out as bullets? Will we eat tires instead of licourice?

Hey, coincidentally I just saw this on CNN's website. Maybe your new hero can get himself one of these, though she's a bit of a prude, no pervy fembot shennanigans with Aiko!

Not only was it predicted that thirty-five years ago or was it twenty years ago that there would be a computer in everyone's household; but there are also blackberry's; palm pilot's and hand held computer devices and think about when you had to actually and physically do research from your local library; with computer technology all one has to do is go to a web-site that features an online library and voila there you have your research and reference.

I should copyright ", sucka" - but only when it's used at the end of sentence like some kind of Ebonic bomb of awesomeness.

Dude, you forgot the best robot of all time.

VICKI - the robot girl from Small Wonder, a thoroughly creepy show about some dude who makes a robot and then treats her like a daughter.

She's fantastic, made of plastic...

For those not fortunate enough to grow up watching Small Wonder, here's just a taste:

Big Plain V- I believe the kid with antennaes that came out of his head whom could turn into a giant robot was Gam from The Space Giants along with his father Goldar and his mother Silvar. The wizard's name was Methusalem and the archnemesis was Rodak who was a Space Vampire. I really cannot provide a link to any of the videos; but if you go to youtube.com and type in The Space Giants in the search toolbar you will be able access the videos that way. And also do you remember Ultraman?

Blackbird - Having a robot body doesn't excuse bad manners. If you're going to spit nails, do it quietly, into your napkin.

Tracey - Do you get a creepy feeling about Aiko's creator? I think he's in love with her.

Timothy - Yessir, computers sure are nifty.

Bryan - Nothing about that show looks familiar except for the girl who peeks through the window. I know I've seen that before.

Timothy again - Yeah, thanks man, I'm gonna go look those guys up and see if they're the ones I used to watch.

I had to laugh. I was watching the news last night (CNN?) and there was a whole story on your girlfriend, Actroid. What a hottie! Does your wife know?

She's not my girlfriend, sheesh. Why, was she asking about me?

You left out the two most important robots of our time. Tweekie from Buck Rogers and Bishop from Aliens. (Okay, maybe you can overlook the former.)

I love your story idea. My geekichlorians are going nutso at the thought of it.

Mmm, the only thing closest to a giant robot show I watched in the 80s was Mazinger Z and Voltes V. Different continent, though, so might have gone by different names here.

I interspersed my robot shows with Knots Landing and Falcon Crest. :-)

V: When I hear about robots and our future and that stuff, it makes me feel depressed and scared. why? Probably Hollywood did that to me. Anyway... I have seen i-Robot...and it makes me feel...wait, I'm talking is circles. okay, well congrats on ideas for a new book.

Earlier this week, a robot actually ``became'' a theatre actor in Japan, for the first time anywhere in the world.

As a fellow writer (OK, so I dabble in a bit of writing now and then) it's great to see people imbued with the creative instinct.

Love this.. Enjoy your robots obsession. I'm enjoying prep schools at the moment.

When the robots start talking to you just walk away. Please, Ray, do it for the children.