I know what you're thinking. "Oh sure, now that he's an AGENTED author, he's too good to pal around with all his old blog friends."

There's just nothing going on.

Nothing blog-worthy anyway. I've been 'planning' my revisions (cuz he asked me to 'think' them over), and it's a little more time-consuming than I thought it would be. Sure, I had it had it all worked out the first day - on paper even - but I want to go that extra mile. I want to impress him with my writerly diligence, my soldierly discipline, my generalized good-doobie-ing. So I've been making a detailed list of every scene in the book, labeling them with whatever purpose they supposedly serve - how they contribute to the greater whole. Since I'm such a big outlining nerd, each and every scene had a point before I ever wrote it, so I was having trouble finding any that were overtly 'unnecessary'. But what I am finding are lots of instances where I've accomplished the same thing multiple times over. So-and-so is a very aggressive character. But I don't need twelve scenes showing him beating on folks. Two's plenty.

So I'm hoping that when I talk to my agent this week, I'll have 'my thoughts on revisions' detailed in writing (to a very nerdly degree of thorough-ness). And since his major concern was that I'd left too many mysteries unsolved, I'm also hoping to have a good draft of each of the four "revelatory plot development" scenes that need to be added.

So that's what I've been doing. 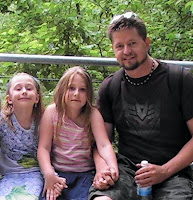 In other news, we had a big celebration last weekend. Maybe I'll have some pictures to post later this week. Secondly, I'd like to remind all the locals that the twin's big birthday/Halloween party is this Friday at 5 pm (happy eighth, girlie-girls). Thirdly, I'd like to very crypticly mention that it's been confirmed: the Veenie Babies officially have one less mouth to feed. If you know what I'm talking about, please don't blurt it out in the comments.

I wouldn't want law enforcement officials discovering the extent of my criminal negligence.
Posted by Ray Veen at 6:52 AM

Happy birthday to your twins! Mine turn 2 around Thanksgiving. :)

I was going to say that you're too organized, but when I gave my edits to my agent, they came complete with a list of major changes, with page numbers, so that she could zero in on the big stuff. LOL

Wow...you are organized! (Though, if I had an agent request revisions, I'd be so freaked I'd probably create colored graphs and flow charts.)

Happy Birthday to your girlie-girls! (And I won't even venture a guess about your cryptic message ;>)

The chapter breakdown sounds like great advice. I wonder how much your manuscript will thin down on this diet. I remember you being concerned about the length before.

Carrie - isn't it crazy how we both write and have twins and live in MIchigan and are the funniest people we know?

Vivi - Colored graphs? Excellent idea. I totally need some of those. (Crpytic hint #1: 917)

Serena - Turns out I was over-stressing about length. His attitude is, 'yeah, cut what needs to be cut, but if it's an overall good book, the wordcount isn't that important'.

They weren't much fun anyway.

Looking forward to Friday, I need to work on a costume.

What time on Sunday is the shindig?

It IS funny. We could be related or something. ;)

Wow. Having an agent sounds like a pain in the butt.
Har!
So revisions, I didn't realize they would pull your work apart quite so much.

Ok, so please can you talk in general terms about the contract? What I mean is, did you need to have an artsy lawyer go over it? Did you need to negociate much? I hope I'm not prying too much, I don't need to know your personal details, I'm just interested in how the process works.
And when will you name the agent?
Never? Is this PC to keep their name on the down low?

PS I did think that since you have been discovered you decided to leave the rest of us in your dust. But I'm glad this is not the case. I have noticed this happen with other writers too. They blog and then get published, and then they don't blog anymore. I thought maybe it was part of the contract to be more 'professional' or something. Will you now get a fancy 'author's website'?
That would be tres cool.

Mmm, that's great your agent says about the word length not being an issue as long as the story calls for it. Makes sense.

(Gosh, I can't believe I just typed "your agent". Are you still just pinching yourself, or are you already over that??)

I love how you dissect the process here. It's kind of like watching surgery, but not as gross. :-)

Happy birthday to your twins!

Shorty - You were planning on buying a gift for this individual? Weird. Regarding Sunday: we may need to have a voice conversation on the telephone machine.

Elizabeth - I don't know a whole lot about the process at this point, myself. Apparently my job is to make a good book. And this right here will probably be my big author's website. It'd be cool to have some big fancy, flashy thing, but it's surprising how many famous authors are simply bloggers.

Pink - I am totally still pinching myself. Nothing really feels any different, except for this weird sadness that now I'm accountable to someone else for reaching my writing goals. For example: I had a great story idea planned for NanoWrimo, but obviously Nano is out of the question. That story idea may have to wait years to get written, or it might not get written ever. See? It's sad.

Boo-hoo, cry baby. Oh, I got an agent, my life sucks! I may have to make millions of dollars and not write what I want. I am so unfulfilled...wah wah wah.

For those of us non-agent-represented writers, we think you owe us gratitude, and I don't know, like money or something. Cuz we read your "simply blogger" blog. And propped you up when you were uncertain about your...

Oh, I'm such a delicious bitch. But it's ok because I'm your sister.

Ooops, you're unplugged, too. Damn.

Happy B-Day to the twins. Hope they have a great time.

Bunny, Bunny, Bunny... you know I'm always tuned in to everything that's on your mind.

Roo - thanks. I hope you and your family are doing well.

As you blog readers can see, Bunny, aka BPV's sister-sib, is also quite the writer. Guess it runs in the family...writing, I mean! Now I do have to say I am not altogether sorry about the missing family member. I never got close to him, for one thing. I just hope the member is missing and not exactly gone forever....know what I mean....hope not!

Coming back to this entry--I've had the same problem with establishing the same thing over and over. I'm hoping I'm past that issue with this book. Writing daily seemed to help.

So how are you editing it out without fouling up your storyline?

Well, I WAS wondering where you'd gone...but I suppose with all the hullabulloo will let this one slide.

Happy B-day to your twins.

Congrats on being agented.

Love the low-down on your process.

I Must learn to write in paragraphs.

Until then, only choppy sentences. ;0P