After two years of collaboration, Nancy and I are pleased to announce the release of our self-published, illustrated, middle-grade fantasy novel -- 'Elfhame'.  It's available now.  On Amazon. 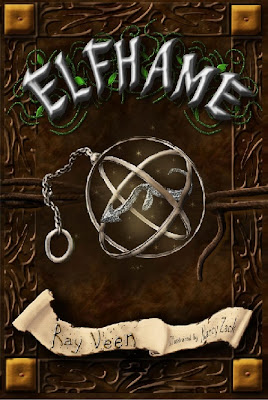 She knows her mother’s name is Carowyn, she knows their home is at the bottom of a green valley, and she knows that a monstrous changeling currently resides there – sleeping in her bed, eating her meals, living her life under the sun with her mother.

Abducted when she was just a baby, Xierna has known only hardship and labor in the twilight realms of Elfhame. To the men of the Upworld, Elfhame is myth, a tale for children as they’re tucked into bed. But this is where Xierna has lived her entire life, as a slave, insulted and mistreated by her dark masters. Home to the elder races of fae, Elfhame is divided into thirteen peculiar territories, ‘brughs’, connected by a series of enchanted door-chambers. Xierna knows the ancient path through them, she’s ‘acquired’ the proper pass-warde, and when she gets her chance to escape, nothing will stop her from finding her way to the sun. And then on to the green valley with her home and her mother.

She’s made a solemn vow to “get free… or die trying”.

How this book came to be:

Perhaps you've heard of 'changelings'?  The monstrous things left behind when capricious faeries come in the night, and steal a baby from its crib?  I'm sorry -- you thought faeries were good and kind and sprinkled fairy dust around to help make flowers grow?  Afraid not.  If Disney presented faeries the way folklore portrays them,  their movies would be dark, twisted, disturbing things.  Our children would wake up every night crying because they'd had nightmares about the nasty little creatures.  Irish folklore, in particular, is full of stories of changelings, and what people did to drive the monstrous 'crimbals' away.  In my research, however, I found no mention of what became of the infants that were stolen.  In my imagination, they were either raised as slaves, or eaten, and that's where the idea behind this book took root.  (From the slavery angle -- not the other thing).

Originally written in 2007, I set Elfhame aside for a while to work on young adult projects.  For some reason though, it always occupied a special, mushy, child-like place in my heart.  It's always been one of my favorite stories, and I always kind of fantasized about what it would like if the book were illustrated.  And then in 2009, after my 20-year class reunion, I learned that my one buddies had married a talented artist.  In 2010, I approached said 'talented artist', and asked if she would interested in collaborating on an "art-project" -- a middle-grade fantasy novel -- with the eventual goal of self-publishing.

Joking.  She accepted, obviously, because if she hadn't, I wouldn't have the pleasure of writing this blog post today.  Without boring you with too many details, I will say that the collaborative process, though lengthy, was a smooth one for us.  Nancy truly is a gifted artist.  And fortunately, she has the patience of saint.  There were many instances where I asked her to do certain illustrations over and over because they didn't quite mesh with my all-important 'vision'.  Luckily she stuck with, and kept cranking the drawings out, and never got the first ruffled feather when I told her I was less than thrilled with one of her pieces.  Long-story-short, here we are, two years later, finally with a published novel.

As I said before, this is mainly a project book for us, and neither of us has the ambition to do the footwork that self-publishing requires.   We're just happy to have it out there, and this one blog post is the sum total of our entire 'marketing strategy'.  If you feel so inclined, however, Nancy and I would appreciate any shares or re-posts.  Ideally, we'd like you to use the cover image, book description, and link, but hey... you're the one doing the favor.

"Always let your conscience be your guide."  (see what I did there?)

Congrats on your release! I know you've been working on this for quite a while. It must feel good to have that project really and truly done.

A tablet and a laptop come together at http://www.
squidoo.com/samsung-ativ-smart-pc-pro-700t-review
my web page - Check this out