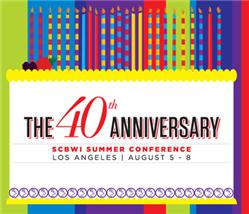 Holy crap, it's almost here!  In two days I leave for Los Angeles to attend the 40th anniversary 'Society for Children's Book Writers and Illustrators' conference.  And this is a big one, y'all.  It's so big, they had to put the word "international" before the title, so... more than one nation -- that's pretty big.  For anybody who doesn't know, writing conferences are a magical place where powerful wizards emerge into the mundane realms to share the secrets of the arcane arts with willing mortals, or so I'm told.  I don't know because I've never been to one before.  Which is kind of what this blog post is all about.

Any of you been to a conference or two?  Any stories or advice or pearls of wisdom you'd like to share with a runny-nosed newbie?
Posted by Ray Veen at 9:18 AM

I've never been to one either, so I have no advice or pearls of wisdom. Except that I hope you have a FABULOUS time, and I'll be sending lots of good vibes your way! We expect a full report when you return. Give Bliss a noogie for me!

P.S. I'll be so curious to hear what the agents were like. I've heard some scary stories...

I've been to the SCBWI Winter conference in NYC three times. I hear the LA one is more intimate, with smaller groups and more time to socialize.

You are going to have such a great time. A bunch of Apocalypsies are going and I've been frothing at the mouth with jealousy.

My one piece of advice: write everything down that you find useful/important because you'll never be able to remember it all. Write down who said it too.

And tell that snarky funnyman Bryan Bliss I said hello too.

First of all, wipe your nose. Secondly, have fun!

That's awesome! I'm going to World Con and I'm so excited about it. You better come back with some stories. I will agree to postpone our playground fight until then. :P

Vivi -- Thanks for the good vibes. I'll be sure to share all the gory details when I get back. Maybe even gory Bliss details.

KM -- That's a great idea. With my memory, I'd probably forgot everything by the time my butt hit the seat of the plane. I'll say hi to Bryan for you.

Jen -- Oh it's still on. You just wait there by the flagpole. I'll be back on Monday.