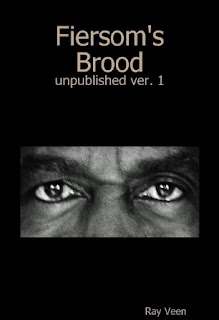 Do you like the taste of 'update salad'? In case you've never had it, that's where I (your chef) mix together many healthy and tasty ingredients, and you (my patron) try to choke it down without making a face. Would you like to give it a try?

So I'm in the process of changing my blog back to normal, couldn't bear all that hard to read stuff even though I do love the rain. Briefly had a cool Guinness layout from Pyzam but it appears as though Blogger doesn't care for Guinness. This scary picture with the eyes is the cover for the beta versions of Fiersom's Brood that just came in. For my local friends, I'll try to get copies to you next week. For my online friends, digital copies can be sent to you should you actually have many hours to spare beta-reading. I sent in a bunch more limericks to the Irish Music Festival people but I'm reluctant to post them until after the contest because if you read the last few comments on my previous post you'll see that I'm starting to worry about the competition. Gotta win. Totally. I'm back to doing writing stuff all day long cuz my kids are back in school but I'm not sure what to work on. I've been molding this strange pair of query letters and I think I need some help deciding which will go out into the world and which will be quietly slaughtered and buried in the back yard. Expect a post soon where I will ask you to help me to decide their respective fates. In the meantime, my beta copies have subtly indicated that I should immediately start on another line edit of Fiersom's Brood. Because some of it smells funny. I fell into my tub yesterday morning cuz I was wearing pajama pants and sitting on the edge to brush Brooke's hair - she backed into me and I slid and fell hard and caved in the back of my skull. It hurt and they laughed but I'm much better now. And guess what? I'm going to try to quit smoking. Again. Tomorrow. For the enty-enth time. I don't know about you but this salad is starting to taste funny so I think I'll just push myself away from the table and excuse myself to go to the bathroom where I intend to stick my finger down my throat. I'll understand if you want to do the same.

Because I love you all and don't want to give you food poisoning.

I shall return to help pass judgement on your queries. Oh how I love to hear myself talk!

Wow. That's quite the cover.

You change blog layouts like a girl changes her clothes before a date :-). I like this one coz it's easier to read, but the "rain" one was cool, too.

Good luck with quitting smoking. I have never smoked, but my dad did while I was growing up and I was glad when he finally gave it up a few years ago.

Btw I have an Irish brother in law.

Ok so this may be a really stupid question, but I have no idea so I must ask.
What is a beta book?
What are beta readers?
I want to know this writer jargon.

Vivi - Glad you liked the salad. Plenty left over, so, help yourself to seconds.

Pink Ink - Sorry about the template schizophrenia. I think I'll probably stick with this, the tried-and-true. And thanks for the well-wishes regarding the smoking.

Elizabeth - Glad you asked about the jargon - I love to talk about this kind of stuff.

The term 'beta' comes from the software industry, like 'beta' testers and 'beta' software, that kind of thing. The idea is that the company has this imperfect product, and they want fairly skilled users to put it through its paces, find out where it's weak, try to break it, that kind of thing.

So writers take their imperfect manuscripts and give them to knowledgeable readers for feedback. Anybody can read a book, you know, but it takes someone knowledgeable to catch character issues, passive writing, 'over-writing', all the elusive writerly things that your average reader wouldn't neccessarily look for.

So 'beta' copies. I'm sure you've printed out your manuscripts before, and you know how expensive and how much work it is to print out a 300 page book. It usually costs me about twenty-four dollars, and then there's all the collating and hole-punching and threading it into a binder for safekeeping while it's getting passed around. A lot of writers (including Serena) have started using print-on-demand services, like Lulu.com to make cheaper, nicer, more convenient copies for their beta readers. Fiersom's Brood is over 500 pages, a little long, I know, but each of my copies cost $14.50. Plus it's fun to see your name on something that looks like a book. See how cool that is?

A word of caution though: unless you really want to 'self-publish', you have to be sure that you select the option to keep your work private, otherwise the publisher will assign it ISBN number, and put it on the market - you've just squandered your 'first publication' rights. Traditional publishers and agents are reluctant to take on 'self-published' novels, because I guess there's a bit of legal snarl. Which isn't to say it doesn't happen - it's just rare.

Anyway, besides picking the 'private (available only to me)' option, I also plaster my beta copies with disclaimers. I say something like "This manuscript in no way represents a publication of any kind. It is a private preliminary copy for trusted readers, and is not to be bought or sold for any reason." I even put it under the title: 'unpublished version 1'.

Wow, this comment is suddenly longer than most of my blog posts. Did I answer your question? If you want to know more or have any other questions, feel free to email - my address is beside my profile picture. If I know the answer, I'll be happy to blab on and on.

Most imformative!
Now where to find 'knowledgeable readers ' cuz I just use family.

DragonBuster? You still out there, buddy?

Thanks for stopping by my blog world. I like the idea of printing copies for beta readers. But (and this is really superstitious and goofy) the first time I want to see my pages bound in a book format is in Borders or an advance reading copy.

But it does seem like a good way toi get copies out to readers.


Great, fun blog you have here!

Thanks for not giving me food poisoning, and thanks for stopping by my blog. Come on over anytime ;-)

Hello Prince Balthazar and Colby, welcome to you, as well, in return, reciprocally, in addtion to, for... er... visiting my blog.

You both have cool blogs and your presence here raises the property value, so on behalf of the neighborhood association, please enjoy some pie.