The week in pictures 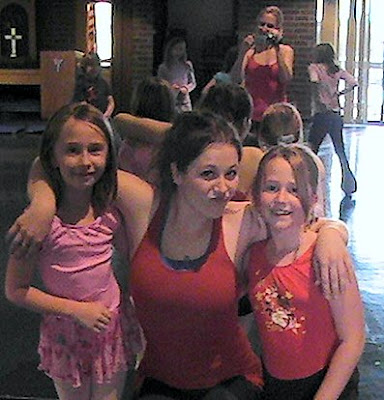 There's been entirely too much talk about writing up round this here blog lately. I mean, I do have a family, too. So I thought I'd catch up on a few pictures. Last week was the twin's last dance class for the session - here they are with their instructor in the top picture (note the hottie with the camera in the mirror behind them). I have some video, too, but that will take some time to distill. Also last week, Hailie had her last football game for the season. Buc's won 48-0, thanks to the inspiration and pep-infusion of their wonderful cheerleading squad; because it's all about school spirit, no? 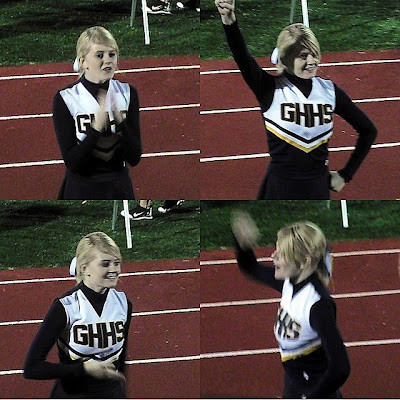 This past weekend was a busy one. Friday was the twin's Halloween/costume/birthday party. Twenty kids in disguises running wild throughout the house and yard, using groin shots and guerilla tactics to take down the teenagers. Add cake, ice cream, and several big bowls of candy, and it's sheer chaos. An interesting side note: Chantze got to meet Hailie's boyfriend Don for the first time. As little brothers are well-known to do, Chantze has been tormenting Hailie about her boyfriend for months: calling Don a hobo, saying he was in prison, offering Hailie quarters in order to call him. So when the two young men finally met face-to-face, I held Chantze by the arms and offered Don one free punch, which he declined. Don's a nice boy. 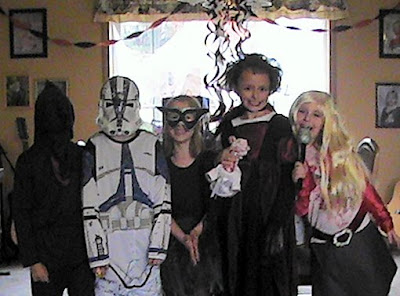 (I've gotta stop using the video camera for stills)
One final update: kind of a convergence between my writing and family life. My wonderful sister and mother had a congratulations get-together for me on Sunday. It was a very pleasant evening of catching up over tacos and coffee: two of my top three favortie ingestible substances (the third being Guinness). They even had a cake, gifts, and a big cardboard facsimile of the book cover for Fiersom's Brood (my working book-cover, not the actual published book cover which remains shrouded in the mists of the future). Thanks for everything, guys. It was very special, it meant a lot to me, and I'll surely remember it for the duration of my writing career.

It was my pleasure to plan a celebration for you. I can't express how excited and how proud of you I am!

You party lots over yonder where you live.
By tacos and coffee did you really mean sushi and saki?
Cuz I would have come to that.

Shorty - thanks again. Used the fancy writin' pen all day today and I was the envy of all the surgeons. (Like they know how to write by hand)

Elizabeth - Yeah, we had sushi tacos and fermented-rice-flavored coffee. If I'd have known how much you liked them, I would've made sure Shorty invited you. Next time, I promise.

Dude, you got a party? GIFTS? I'm sending all of my friends and family over to your blog so you can show them how badly they're slacking. :)

You and your family seem to have the greatest attitude about celebrating life, Ray.

I agree with Mary.

I think if you woke up and the sun hadn't come up, you'd still have a party. :-) The cardboard cover thing sounds so fun.

I love the episode of lil brother meeting sister's b.f. Don sounds like a keeper.

Carrie, Mary, and Pink - You guys are exactly right. I come from the kind of family that just loves to be together and celebrates any accomplishment.

Between them and my co-workers last weekend, I'm a little surprised that people are making such a big deal out of this. It is a big deal to me and Cindy, but to have so many want to congratulate us so enthusiastically -- it really makes me feel loved.

I'm a lucky man to be surrounded by all these caring (and jovial) people.

What a beautiful family you have! Your fun spirit just rolls off the page (screen?).

Thank you very much, Ms. Ellis -- and welcome. Are you a Michigander too?

You guys just seem like you are celebrating all the time - what a great way to live!

And it is just way too cute how you are always crushin' on Mrs. V!

I have always had a great number of reasons to be proud of you and the list just keeps getting longer! As for the party, I got some excellent help from Val and Jamie and hubbyman, the Mexican food was as sumptuous as it comes, and it was so nice being together to celebrate a wonderful accomplishment. I noticed M & M seemed to especially appreciate the home cooked meal and being part of the family. So it was all good. Now I am wondering what to do with the poster. The cats have been playing with it.

I see someone as Hannah Montana! YEAH! :-)

Tracey - It might be arrogant to say this, but Cindy and I have the best relationship of any married couple I have ever met. Seriously.

Mom - Thank-you ten more times. But don't let the kitties chew on my book cover. Now that I think about it, it might look nice hanging in my office.

Madison - Yeah. I tried to talk her out of it. But you know little girls - Hannah Montana is like their goddess of everything.

I loved watching Hailie cheer at the homecoming game...she is exhuberant cheeringly. (That's a phrase's phrase.)

I'm so glad we got to go to the birthday party. The kids were super cute, and it really helped cheer me up. I had a great time giving Eddie hell. He is just the best person to give hell to because he so deserves it, but he laughs at it, too, so everyone gets to have fun.

As for the Sunday author celebration....damn I forgot to open the champagne. And I bought kiddie champagne and everything! And braved the evil-eyed check out with a liquor-type product on Sunday in Ottawa County. You know that counts for like 10 bonus courage points.

Why'd you try to talk her out of it? I'm almost 20 and I LOVE Hannah! Yeah, I'm lame and dorky, I know, but I liked Billy Ray before Miley was famous. Acky Breaky Heart....right on! :-)